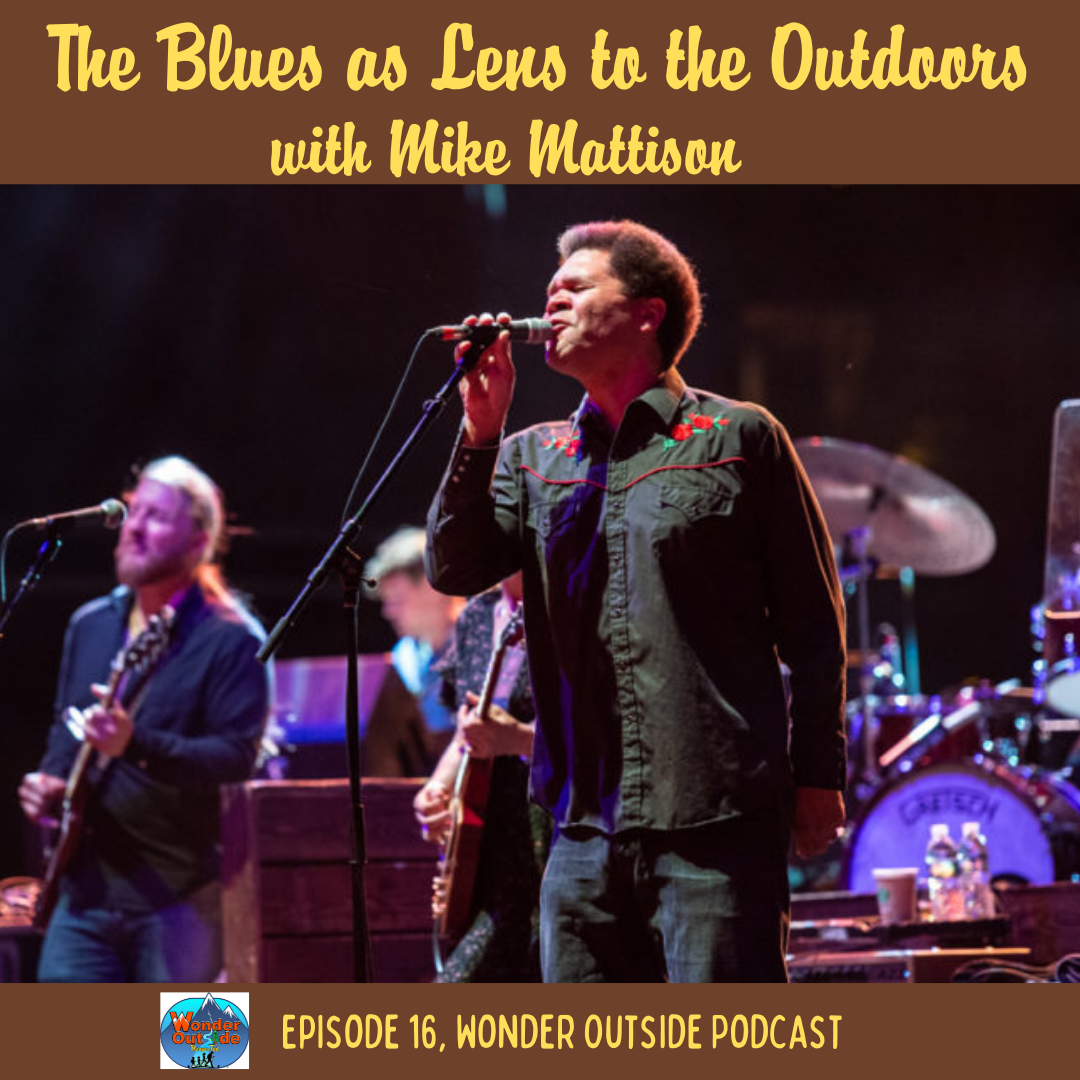 As a singer, composer, author and student of blues music Mike guides us along the many routes in which the blues meets the outdoors.

Birth of the Blues

“First and foremost the blues began in a rural setting. Black people were toying with forms they had already come up with, whether it’s gospel,  work songs or field hollers.”

“The songs were the accompaniment that they came up” (whether working of their own free will or not) as a way to make the work go more quickly and also was a way of organizing the work. And out of that stew, the blues was born.”

He’s quick to point out that the relationship of the blues to the outdoors is both unsentimental and often highlights natural disasters.

“There’s so so so many blues songs about floods, especially the Great Mississippi flood of 1927.” Mike points out two blues songs that refer to that event that is called the “most destructive flood in the history of the United States.” Charley Patton’s, High Water Everywhere and Floating Bridge by Sleepy John Estes.

“I Never Will Forget That Floating Bridge”

With detailed knowledge of the evolution of the blues, The Great Migration, and the transition of the blues from a country setting to the urban settings of Chicago and Detroit, Mike reminds us that “anything you see, anything you hear is worth singing about.”

With encyclopedic recall, Mike discusses the great blues legends and their contributions and inspirations. From Howlin’ Wolf to Sleepy John Estes to Mississippi John Hurt Mike gives us a tour of both the rural south and the urban north through blues music. Along the way we’ll hear some audio samples from these greats.

The effect of the blues and how it’s been impacted by the landscape has been profound. Mike says that the honesty of the blues is what makes us ourselves. And that anyone with an understanding of that, with humility, can come to the blues.

Never that bad until it got to 5 below

Mike talks about growing up in the extreme seasons of Minnesota. He remembers playing hockey where games weren’t cancelled until the temps reached 15 below zero. But he appreciates it and how our parents and friends were simply in it, even embraced it, without much complaint.

The Lake Was Our Playground

Michael also remembers how our time outdoors, especially on Lake Vermilion in northern Minnesota, was foundational in our childhood. From exploring the lake in the motor boat as a child to seeing bald eagles and osprey to this day, he continues to share the extraordinary experiences of this landscape with his family.

We Escaped to Our Backyard

Mike has lived with his wife and daughter in Carrollton Georgia, outside of Atlanta, for more than 10 years.  He recounts how they made simple adjustments to their backyard in order to escape both the heat of the summer and the isolation of the Covid pandemic. A good reminder for all of us that getting some simple outdoor rest and relaxation can be critical to our physical and mental health.

Finally, Micheal and Ernest Suarez have written a book that just came out on Nov 15.  It’s called Poetic Song Verse, Blues Based Popular Music and Poetry. You can pre-order the book now on most platforms. More about that title is here from the publisher, University Press of Mississippi.

This new segment is designed to inspire YOU to get out there and try one new thing in the outdoors. In this episode I talk with Larry Clarke about health, hiking, biking and his one new thing. Larry is a very talented actor, writer and director and his show Bitter Homes and Gardens created by he and his wife Fielding Edlow is available on YouTube.

Larry also appeared on the American Glutton Podcast. We discuss some of those same health and diet related issues, including body dysmorphia, during our chat.

The challenge is back! Where can you go that’s 3 minutes, 3O minutes or 3 hours from you? Today we start on Main Street in Greenwood, Mississippi which just a few miles down the road from Avalon, the hometown of Mississippi John Hurt.

In Greenwood on Main Street are two wonderful restaurants, Fan and Johnny’s and Tasty Sipz where you can eat anything from hot wings to Fried Alligator Comeback.

3 minutes from there is an unnamed park along the Yalobusha River which is part of the greater Yazoo and Mississippi River Delta.

31 miles away is the Tallahatchie National Wildlife Refuge, a critical stopping point for migratory birds.

Less than 3 hours away, 116 miles is the Bienville National Forest with large expansive woods and waterways for boating, fishing and camping.

What’s within 3 minutes, 30 minutes and 3 hours from you?

DJ Shark is back and we discuss the song Nutbush City Limits by Ike and Tina Turner. This little town in Tennessee is where Tina Turner grew up and this song dovetails perfectly with our Mike Mattison’s reflections on the blues and the history of the south.

Despite losing their case and needing to pay 9.5 billion dollars to clean up the toxic dumping in Ecuador, Chevron instead personally attacked Steven Donziger. This clear campaign of intimidation is designed to scare off any future law suits against the oil giant.  It’s been more than 10 years since Chevron was found guilty of this human and ecological disaster and they have yet to pay one penny or clean up one drop of their toxic and deadly mess.

Please go to the Free Donziger website to learn about this case and take action.

As promised here is Steven Donziger’s address where you can write him a letter of support: